The Campus and Its Location

Honolulu Community College is on the mokupuni (island) of Oʻahu and sits in the moku (district) of Kona, ahupuaʻa (land division) of Kapālama and ʻili (smaller subdivision) of Niuhelewai.

"An enclosure made of the sacred wood from the lama tree..."

"Kapālama was especially important to the aliʻi of Oʻahu. In that ahupuaʻa, ritual enclosures of lama wood (a native hardwood) were set up to create the best conditions for the union of high-ranking aliʻi, in order to produce firstborn of the highest possible kapu (rank). Thus the name of that land section means "lama wood enclosure."

"Old part of Honolulu, site of the battle in which Kahekili of Maui defeated Kahahana of Oʻahu; a stream here was choked with corpses."

"...named "the edge" because it was a small area between two large ones."

"Kalihi in Honolulu is famous in legend as the home of Pele's sister Kapo, and of Haumea, Pele's mother who is identified with Papa, the wife of Wākea. She had many adventures at Kalihi and saved her husband Wākea, who was being taken away for sacrifice, by embracing him. His bonds loosed and the two disappeared into a tree."

According to historical land documents, it was revealed that the land that Honolulu Community College occupies was divided into six ʻili or ancient Hawaiian land divisions. In 2016, place name signage representing the six land areas were designed and mounted on identified buildings across campus.

HonCC's place based signage supports the work of the college to create a SENSE OF PLACE that is culturally significant and relevant. Additionally the campus signage reinforces and aligns our commitment to Hawaiʻi Papa O Ke Ao, the University of Hawaiʻi's "goals and objectives to address the higher education needs of our indigenous people—Native Hawaiians—by creating a model indigenous serving institution." 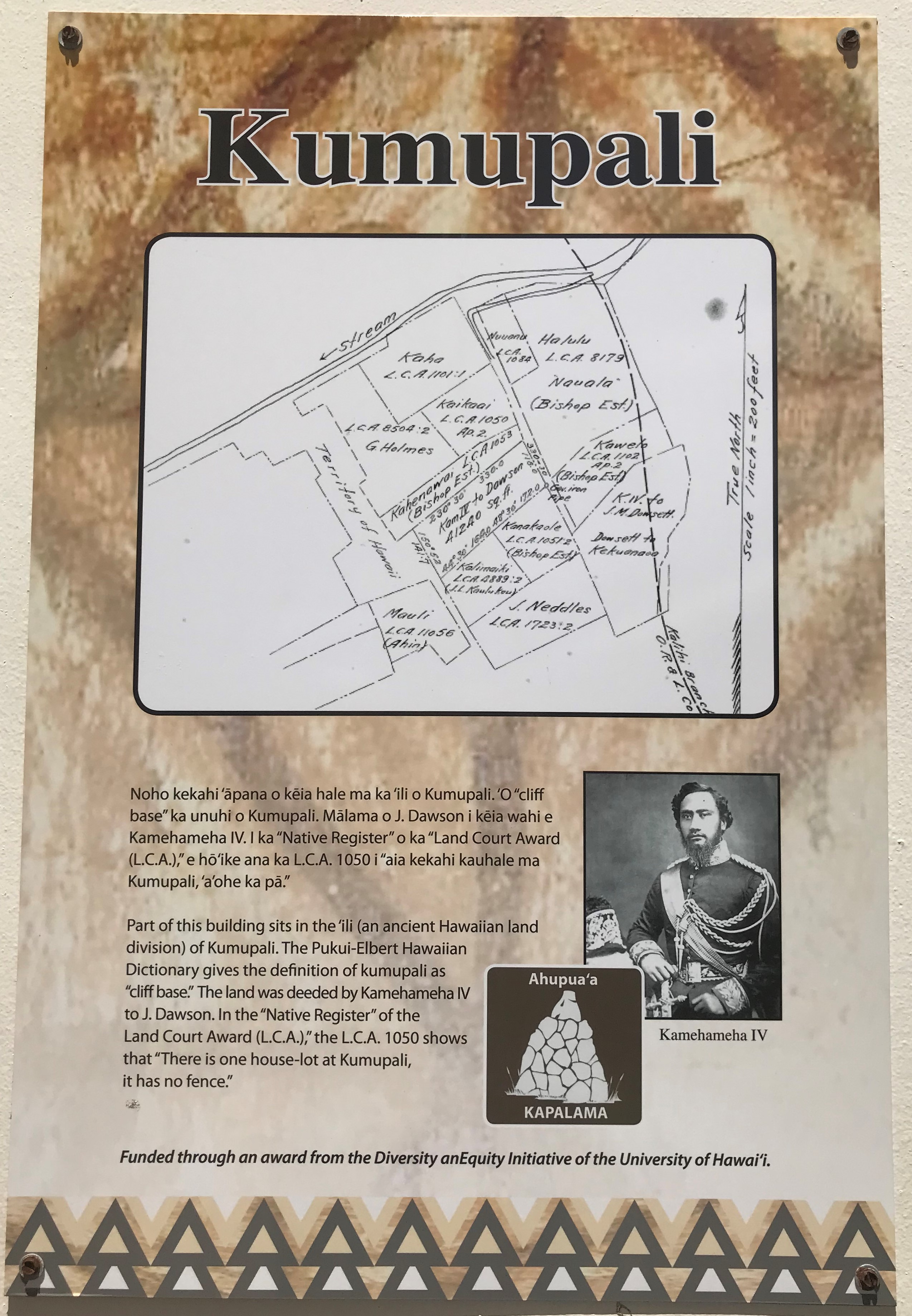 Part of this building sits in the ʻili (an ancient Hawaiian land division) of Kumupali. The Pukui-Elbert Hawaiian Dictionary gives the definition of kumupali as "cliff base." The land was deeded by Kamehameha IV to J. Dawson. In the "Native Register" of the Land Court Award (L.C.A.), the L.C.A. 1050 shows that "There is one house-lot at Kumupali, it has no fence." 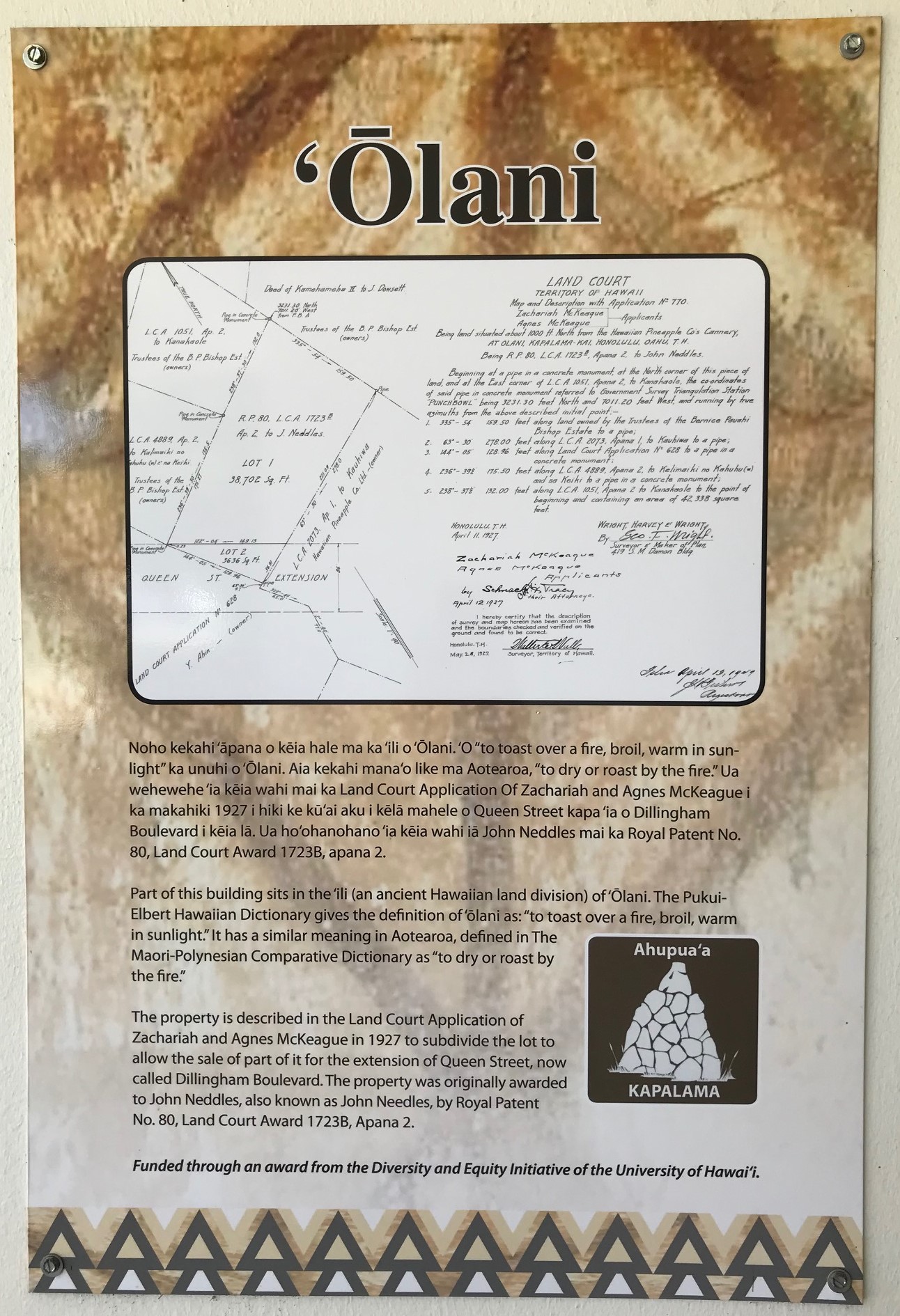 Part of this building sits in the ʻili of ʻŌlani. The Pukui-Elbert Hawaiian dictionary gives the definition of ʻōlani as: "to toast over a fire, broil, warm in sunlight." It has a similar meaning in Aotearoa, defined in the Maori-Polynesian Comparative Dictionary as "to dry or roast by fire."

The property is described in the Land Court Application of Zachariah and Agnes McKeague in 1927 to subdivide the lot to allow the sale of part of it for the extension of Queen Street, now called Dillingham Boulevard. The property was originally awarded to John Neddles, also know as John Needles, by Royal Patent No. 80, Land Court Award 1723B, Apana 2. 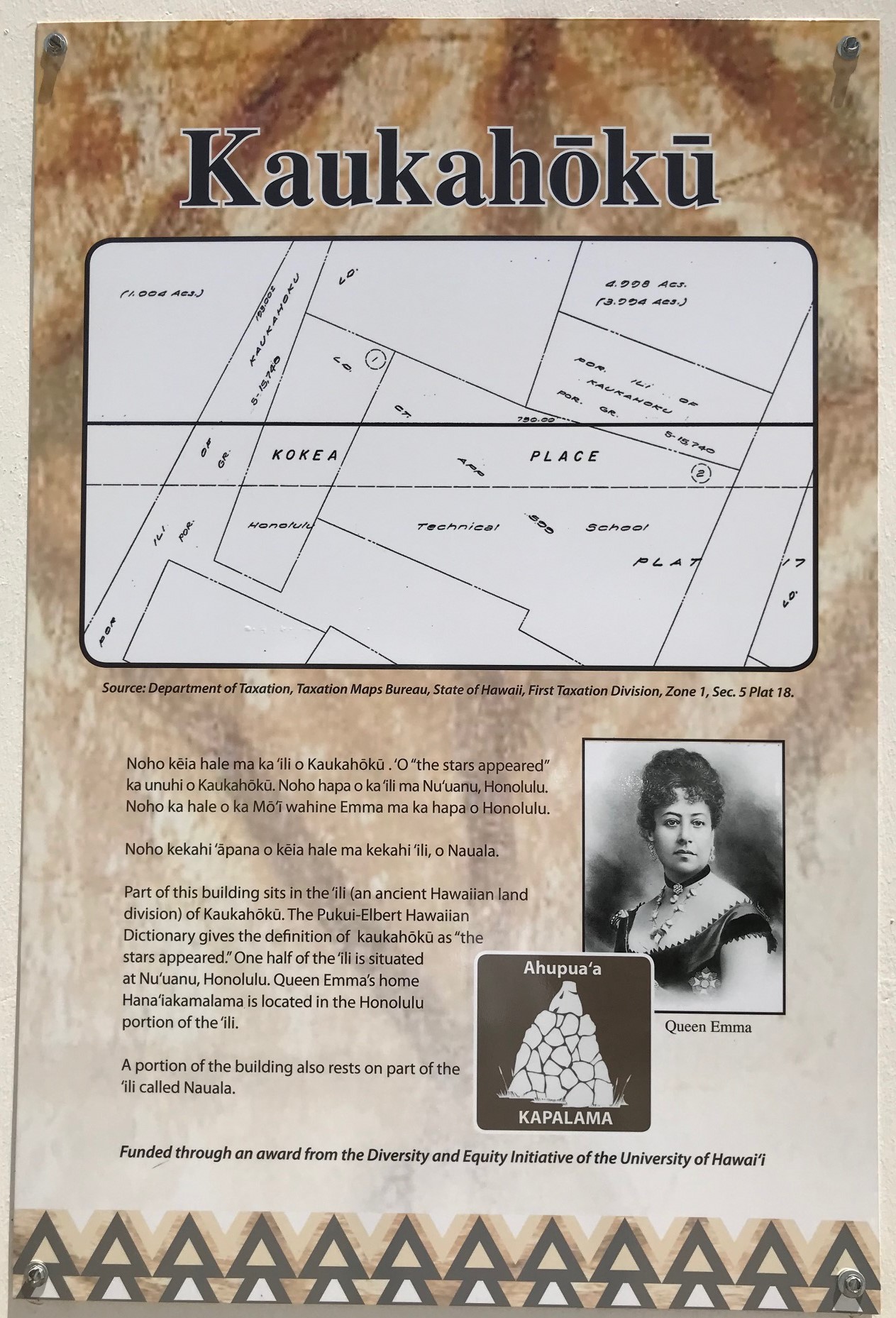 Part of this building sits in the ʻili of Kaukahōkū. The Pukui-Elbert Hawaiian Dictionary gives the definition of kaukahōkū as "the stars appeared." One half of the ʻili is situated at Nuʻuanu, Honolulu. Queen Emma's home Hanaʻiakamalama is located in the Honolulu portion of the ʻili. 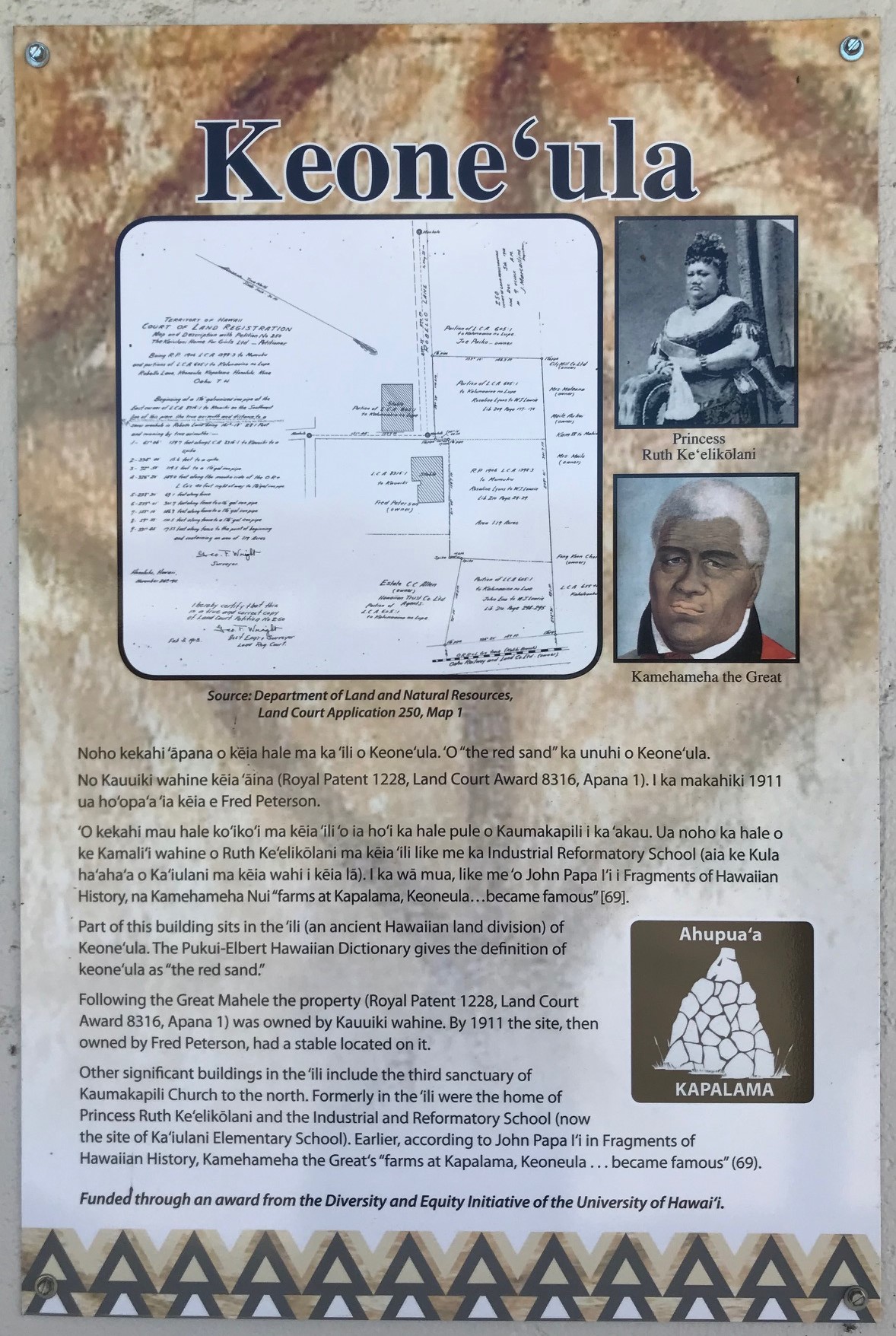 Part of this building sits in the ʻili of Keoneʻula. The Pukui-Elbert Hawaiian dictionary gives the definition of keoneʻula as "the red sand."

Following the Great Mahele the property (Royal Patent 1228, Land Court Award 8316, Apana 1) was owned by Kauuiki wahine. By 1911 the site, then owned by Fred Peterson, had a stable located on it.

Other significant buildings in the ʻili include the third sanctuary of Kaumakapili Church to the north. Formerly in the ʻili were the home of Princess Ruth Keʻelikolani and the Industrial and Reformatory School (now the site of Kaʻiulani Elementary School.) Earlier, according to John Papa Iʻi in Fragments of Hawaiian History, Kamehameha the Great's "farms of Kapalama, Keoneula...became famous" (69). 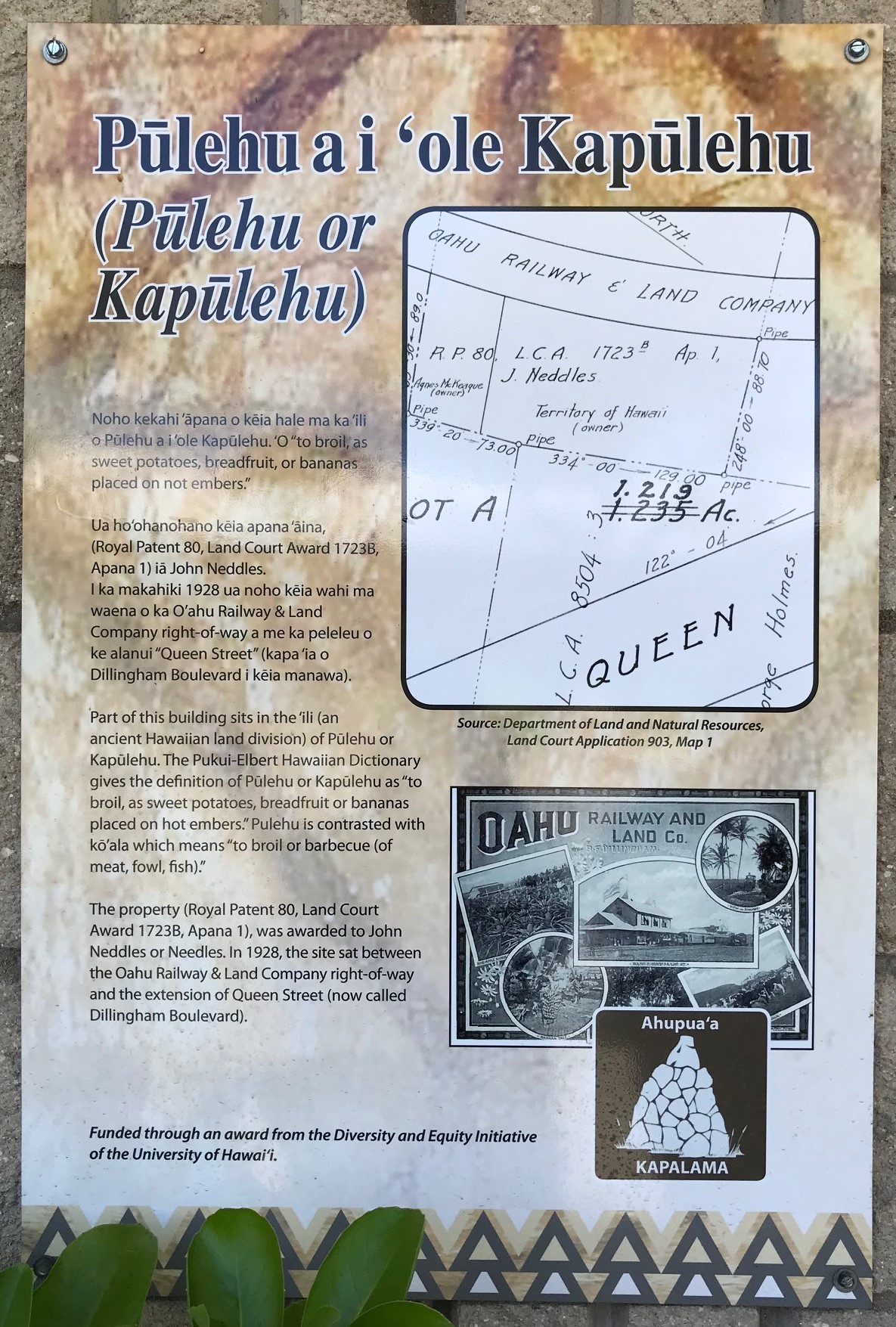 The property (Royal Patent 80, Land Court Award 1723B, Apana 1), was awarded to John Neddles or Needles. In 1928, the site sat between the Oahu Railway and Land Company right-of-way and the extension of Queen Street (now called Dillingham Boulevard).