Surfing to be official high school sport in Hawaii 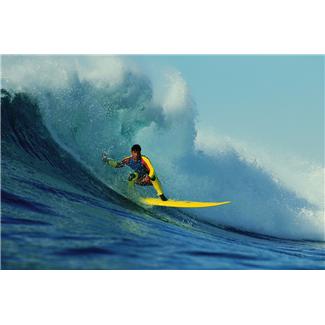 HONOLULU (AP) — Football wears the crown in Hawaii, but the real sport of kings is surfing.

Hawaiian chiefs and royalty used to glide across the Pacific centuries ago as form of expression, to show courage and to compete. Today, it's big business and people ride waves across the world.

"Hawaii is the birthplace of surfing," Gov. Neil Abercrombie said. "From Duke Kahanamoku to the thousands of residents and visitors who surf both recreationally and competitively, the sport is rooted in our culture and way of life."

Abercrombie's comments come as Hawaii prepares to become the first state in the nation to make surfing an official high school sport, joining the likes of football, basketball, volleyball and swimming, starting as early as spring 2013.

"It's quite clear, when you think of Hawaii, you think of surfing," said Abercrombie, with Waikiki beach behind him. The news conference was held near the statue of Kahanamoku, an island icon and Olympic gold medal swimmer known as the father of modern surfing.

The Aloha State is known for its world-class surf breaks and competitions. It is home to many pro surfers and has produced several world champions including Hawaii's Carissa Moore, who this summer became the youngest world champion at 18.

"I think it's awesome, and it will open doors for kids," said Moore, who welcomed the announcement. She said the sport taught her many life lessons growing up, such as hard work, perseverance, and time management.

"Surfing and riding a wave is so much like life. You fall down over and over again, but you keep picking yourself back up until you ride one all the way to the beach," Moore said. "I know that's kind of cheesy, but I think surfing is definitely a really good outlet for a lot of teens and young kids. It's a way to channel a lot of energy into something positive. It's just really awesome."

Hawaii has the only statewide public school district in the nation, which means surfing will be offered as a sanctioned prep sport in schools across the islands.